You Miss 100 Percent of the Shots You Don’t Take!

Home/News & Events/You Miss 100 Percent of the Shots You Don’t Take!
Previous Next

You Miss 100 Percent of the Shots You Don’t Take!

Take a shot at nominating a deserving industry member for the Florida Citrus Hall of Fame.

A few years ago, I was approached by someone at an industry function whose opening line was “I gotta talk to you!” So, we walked out into the hallway to chat. He immediately started jabbing his finger at me and said, “We have to get this guy in the hall of fame! I can’t believe he’s not in there already!”

Wow, I thought. “Who is it?” was my reply. When I found out I emphatically jabbed my finger into his shoulder and said, “Well, someone has to nominate him first!”

It’s kind of like a lottery ticket; you can’t win if you don’t play. 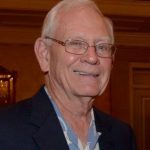 Fortunately, Jim Snively made the effort to put together a nomination packet and letters of support for Jack Norris, who was inducted into the Florida Citrus Hall of Fame in 2016.

Therefore, for all of you out there thinking that so-and-so should be in the hall of fame, please take the time to nominate him or her! Check out the list of Florida Citrus Hall of Fame members. I guarantee that you will think of someone you know that you may have thought was already a member but isn’t.

We look for people who have made significant contributions to the Florida citrus industry and worked for the betterment of the entire industry — not just their bottom line. An ideal candidate is someone who has taken the time to serve, collaborated with other people, developed a unique method or tool, promoted or marketed the industry, etc. You have until Nov. 1 to put together the information and submit nomination forms. Information and videos on past inductees can be found on the Florida Citrus Hall of Fame website.

All nominations should include a full summary of the nominee’s accomplishments, letters of support from industry members and a photo. Why a photo? We announce the new members immediately after the selection meeting, and the media always wants photos of the inductees, so please try to include one with the nomination packet.

Keep in mind that the selection committee members must rely on the information that is submitted about what the nominee has done that has made a beneficial impact on the citrus industry. Just because someone has lasted a long time in the industry and has been a grower for however many years, while admirable, does not qualify as a reason to be selected.

The selection takes place in December, with induction ceremonies on Friday, March 8, at Florida Southern College in Lakeland. The luncheon is co-sponsored by Florida Citrus Mutual and the Florida Department of Citrus, with the unveiling of the inductee names at the McKay Archive Center, which is sponsored by the Florida Citrus Processors Association.

So remember to take that shot and nominate someone! Like Wayne Gretzky said, “You miss 100 percent of the shots you don’t take!”

Brenda Eubanks Burnette is executive director of the Florida Citrus Hall of Fame. Pieces of the Past is presented in partnership with Florida Southern College’s McKay Archives Center in Lakeland.